Denis and Monique Saint-Cisse were in no rush to have a second child. Their first, a much-desired son named Mathieu, had given Monique eight and a half months of agony not even money could help before giving them both five years of tantrums, paired with a revolving door of nannies who couldn’t outlast the child’s temper. He had broken down their desire for a child into disappointment and frustration. So the couple was surprised and unprepared to discover nearly two trimesters had passed before they found out Monique was pregnant a second time. Only a few months and a painless birth later, Martine came into the world and immediately became the apple of her father’s eye. It wasn’t long before she had grown into a spoilt, precocious child who outpaced the eldest in nearly everything she tried.

The animosity between she and Mathieu was seeded early and only grew as they did. When Martine was six, her mother gave birth to twin girls that she helped name Camille and Noelle. Not even the arrival of two new competitors to the battlefield could rattle the two older children’s rivalry. Mathieu hated the two babies as much as Martine adored them, but the twins were often just resigned to the background while their parents struggled to keep all out warfare from erupting in their home. Petty arguments too often devolved into full-blown fistfights between their two first-born, Mathieu never seeming to care that she was his much younger sister. It didn’t seem to matter. Even in a fight, she humiliated him. If it weren’t landing the last blow, it was always the last word. Whenever there was a chance to prove herself better than Mathieu, Martine took it. And since he was an absolute fuck-up, there were plenty of chances. She thought she was better than most people, knew she was better than him, and never let him forget it. All while basking in the affection of her parents and younger sisters. Her life was so charmed that she never knew what the bottom looked like until it fell out from beneath her.

May 25, 2003: Neglecting to tell his mother that he’d made quick work of a few drinks while she had attended a doctor’s appointment, Mathieu (and the liquor) decide he is “sober enough” and he gets behind the wheel to drive Monique home. He misses a light and their mother never makes it home. Mathieu does, though, a few days later with nothing more than some bruises and a sprained wrist. For once, Denis has nastier words for him than Martine can come up with and her brother was disowned, slapped, and thrown out of the house before she could get a swipe in edgewise. It was her father’s last explosion of emotion before grief turned him into an emotionless shadow of his former self.

Money was never an issue, but from that point forward she was more or less on her own. Her father had always been a busy man whose work required constant travel — without Monique there to keep him grounded and raise their three daughters, he was at a loss. And so were they. Differences in age and ability meant that Martine was separated from the twins when their father essentially gave them up: she to American boarding school and the twins to relatives in France. The culture shock of a life spent mostly in Europe and Asia being suddenly transplanted to the U.S. didn’t leave her much space to mourn and her first two years in the States were spent in repressed misery.

Lacking any real support system in this new country and no longer having the crutch of her father's influence to lean on, Martine retreated into herself for a period. She threw herself into her schoolwork and made no real effort to befriend her peers at first. Her thick accent, bad attitude, and Muslim upbringing didn't exactly make any friends for her either. It was during this self-imposed isolation that she stumbled upon her talent with computers. An honors elective in compsci was just the beginning and a few months later she basically owned the school's system and any kid who'd ever needed a curfew clock-in time changed or a test bank leaked. Eventually she stopped begging Denis to let her travel with him again. Eventually she stopped taking his calls at all, for a time. Graduation came flying at her in the blink of an eye and, faced with the choice of finally being able to return to Europe or staying in the U.S. for university, she decided to stay.

She went on to MIT for a degree in computer science and engineering, her father continuing to pick up the tab even if she hardly spoke to him. The coursework was grueling but not nearly as the constant assumptions from classmates and professors that she didn't have the brains to be there or had somehow undeservingly bought her way in on a whim -- neither of which was true and she had to fight in every new class to prove as much. By the time she earned her degree, Martine was sure she had earned it if not through hard work then just by not losing her mind in the face of all the slights and snide remarks.

It'd been nearly ten years since the loss of her mother and since she'd lived with her father or siblings. There wasn't any idea of home to return to and she was adrift after college, bouncing from country to country and working a series of short-term jobs on programming teams and cybersecurity think tanks. She lived out of a suitcase for a couple years, traveling to farflung places and working for less-than-honorable people for money she didn't even need until 2014. A job she had taken for a private U.S. company landed her in a world of legal problems and on the radar of the government. Her father called in a political favor and Martine was given a pleas deal allowing her to stay in the country on condition of serving parole and consulting with the Feds when called upon. She moved to San Francisco in 2018, eventually purchasing a house there.

currently begrudgingly employed by a branch of US government in exchange for not being deported.
raised a devout muslim, though she has more or less lapsed entirely -- she still follows a halal diet.
her relationship with her father has never recovered from her mother's death or the fact that he sent her away.
she's very close with her younger twin sisters, even though they've lived in a different country since childhood.

tie-ins multilingual (french, english, spanish, dziria, latin, some farsi) and holds two passports.
lost her mother at a young age to an incident her brother was directly responsible for.
one shitty older brother and two angel baby twin sisters, just like monet.
relationship status with victor creed: it's permanently complicated. 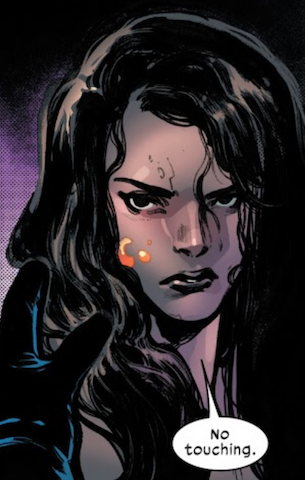 Monet St. Croix: possessed of a multitude of superhuman attributes ... not the smallest of which are beauty and ego.
The second born and most favored child of wealthy ambassador, Cartier St. Croix, Monet was raised along with her siblings in a lavish lifestyle in Monaco, where they all grew accustomed to the finer things that money could buy. Like Monet, her three siblings all developed mutant abilities. However, the mutant power of her only bother, Marius, manifested into something vampiric, causing him to feed on the bone marrow of other mutants. With his own mother as his first victim, Marius St. Croix turned to dark magic and took on the name Emplate. After an inter-dimensional expedition birthed a desire to rule, knowing Monet had impressive mutant powers of her own, the deformed and monstrous Marius offered to share his new power with Monet so that they could rule all realities together. A haughty teenager, she only laughed at her brother's hideous new form and his ludicrous offer. Outraged and filled with jealousy, he trapped Monet in the blood red and razor sharp body of the mute Penance... (more)